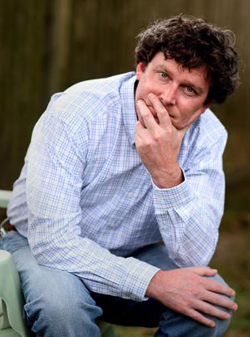 In just a few years, Irish playwright Ronan Noone has quickly drawn acclaim in international theatre circles for his trilogy of plays about Ireland, known as the Baile plays. Now Noone has turned his attention to an American Trilogy that reflects an outsider’s perspective on the US.

The first two works in the trilogy are receiving their world-premier production in Boston this season by the Huntington Theatre Company, the city’s largest and most renowned theater group.

The Huntington opened its fall season with Noone’s play, The Atheist, staring Campbell Scott, followed by Brendan, a comedy about an Irish immigrant living in America. Both plays are directed by Justin Waldman.

Brendan explores the funny and touching experiences of a recent Irish immigrant as he battles homesickness while looking for love and meaning in his adopted country. On the verge of gaining citizenship, a letter from home turns his life upside down, forcing him to realize he hasn’t fully broken free of old memories while he is busy making new ones.

Born in Newry, County Down in 1970, Ronan moved to the U.S. in 1994 and settled on Martha’s Vineyard, where he painted houses and began to write.

He submitted his first play, The Lepers of Baile Baiste, to Boston University’s MFA playwriting program, where it caught the attention of Nobel Laureate playwright Derek Walcott, who invited him to join the program. Lepers won the National Playwriting Award at the American College Theatre Festival, produced at The Kennedy Center.

His next play, The Blowin of Baile Gall, the second in a trilogy of Irish themed plays, was nominated by the American Theatre Critics Association for the Steinberg New Play Award, and won the Elliot Norton Award for Outstanding New Script. Blowin and Lepers both received the Independent Reviewers of New England Award for Best New Script. Baile Gall was produced Off Broadway by actor Gabriel Byrne in 2005.

Noone’s third play, The Gigolo Confessions of Baile Breag was directed by Carmel O’Reilly of Sugan Theatre in Boston.

Brendan runs through November 18, 2007 at the Calderwood Pavilion at the Boston Center for the Arts. For details, visit Huntington’s website at www.huntingtontheatre.org.