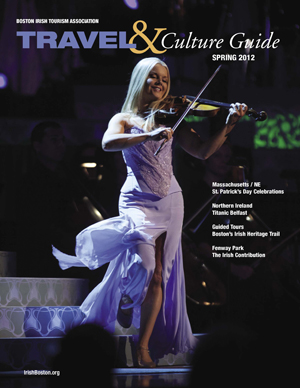 (BOSTON) -- Boston Irish Tourism Association (BITA) today released its 2012 schedule of St. Patrick’s Day activities – including six Irish parades and dozens of cultural events - taking place this March in cities and towns across Massachusetts.
With nearly 24% of residents claiming Irish ancestry, Massachusetts is the nation’s most Irish-American state and has been celebrating St. Patrick’s Day dating back to March 17, 1737.

In addition, there are hundreds of other Irish cultural activities taking place throughout March, which are available at IrishMassachusetts.com.

Local tourism officials are encouraging tourists to visit Massachusetts in March to enjoy the parades and cultural festivities while taking advantage of great hotel and restaurant rates this time of year.

Patrick B. Moscaritolo, President of Greater Boston Convention & Visitors Bureau, says, “Boston's Irish community offers a wonderful way to explore the city's illustrious history through the Irish Heritage Trail.   Once you visit Boston you'll see why it is called the Capital of Irish America.”

The Massachusetts Office of Travel & Tourism promotes Irish festivities on its web site, MassVacation.com, as part of it’s year round celebration of the state’s many ethnic communities.

“Visitors and residents alike have a great time celebrating St. Patrick’s Day in Massachusetts,” says Colette Quinlin of Boston Irish Tourism Association.  “There a wide variety of contemporary culture direct from Ireland as well as rich strains of Irish-American culture and history.”

BITA’s March 2012 issue of Travel & Culture Guide, a free magazine that focuses on Irish cultural activities in Massachusetts and the New England states, as well as travel to Canada and Ireland, is available at local visitor centers in early March.

No visit to Boston is complete without a stop at the Kennedy Library, the official repository for the papers and materials of President John F. Kennedy, the nation’s 35th president and America’s first president of Irish-Catholic ancestry. In addition to year-round permanent exhibits, there’s a new exhibit entitled, In Her Voice: Jacqueline Kennedy, The White House Years, plus various forums, lectures and educational programs taking place.   On March 17, Themselves: An Immigrants Story, is performed for families and children, and on March 27, Irish tenor Anthony Kearns performs.

BITA created Boston’s first Irish Heritage Trail is a rite-of-spring in March.  The three-mile walking tour starts at the Rose Kennedy Garden on the waterfront and winds throughout downtown Boston and into Back Bay, ending up at Fenway Park.  The 20 sites along the way celebrate the illustrious Irish experience in Boston dating back to colonial times.  A map of the Trail is available at the visitor information centers on Boston Common and at the Prudential Center.   Guided tours are available in March and through the spring and summer.  For details visit IrishHeritageTrail.com.

BITA is a membership organization formed in 2000 to promote the state’s Irish-American community and hospitality industry year round to visitors from around the world.   BITA also promotes and encourages travel between Massachusetts/New England and Ireland/Northern Ireland and Canada.

The US Census Bureau indicates that nearly 24% of Massachusetts residents claim Irish ancestry, making it the most Irish state in America.  For details visit Census.gov/

For year round information on all cultural activities and travel amenities in Massachusetts, visit the Massachusetts Office of Travel & Tourism at MassVacation.com.

For information about conventions, visit the Massachusetts Convention Center Authority at MassConvention.com.