Stephen Johnston presides over one of Bostons greenest hotels, in more ways than one.

As general manager of Jurys Boston Hotel in Bostons Back Bay, the Dublin-born hotelier runs one of the citys most popular boutique hotels. The 4-star, 225 room property has gotten rave reviews for its state-of-the-art hospitality amenities, efficient and friendly customer service, excellent restaurant and bar, and for its overall design aesthetic sensibility.

Jurys is also celebrated for its Irish connections as well as its environmental practices  a double dose of greenness that gives it a unique niche in the hotel marketplace.

As the citys first and only Irish-owned property, Jurys has quickly become the hotel of choice for many of Irelands high tech companies, real estate investors and business travelers coming in and out of Boston.

It is also the unofficial headquarters for many of Irelands government officials who visit Boston regularly.

Each March Johnston hosts a visiting master chef from Ireland as part of the Boston Irish Tourism Associations Gaelic Gourmet celebrations leading up to St. Patricks Day. And groups such as the Boston Irish Film Festival, the Boston Irish Reporter and Celtic Sojourn Christmas Concert hold events there too.

On the environmental front, Jurys has emerged as a leader in the hospitality industry because of its commitment to conservation, energy-efficiency, and green business practices.

In 2006 it was awarded the Energy Star green seal rating from the US Environmental Protection Agency (USEPA) for using 28% less energy than the industry standard, and the Good Earthkeeping Award by the Mass Lodging Association.

In 2007 it won a Boston Green Business Award issued by Boston Green Tourism, a consortium of hospitality leaders pushing for safe and efficient environmental practices. 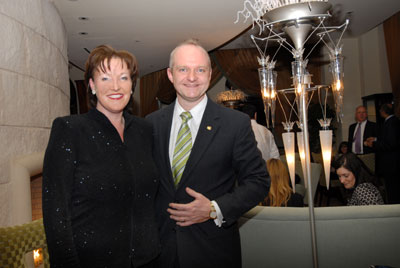 We believe our investment in green business practices sets us apart from our competition, Johnston says. And it is embraced by our discerning guests who seek both luxurious amenities alongside sustainable business practices. You could say that 'greening' our Irish hotel has always been a priority for us."

In addition to the hotels green accomplishments, Jurys also boasts an outstanding restaurant, the Stanhope Grille, a popular lunch and dinner destination for locals and visitors alike. And the hotels bar, Cuffs, is enormously popular with the after-work crowd in the Back Bay, and has a great buzz on the weekends too.

Prior to moving to Boston with his family in 2003, Johnston worked in hotels throughout Ireland and the UK. He is an active member of the Massachusetts Lodging Association (MLA) as well as the Boston Irish Tourism Association (BITA) and Friends of the John F. Kennedy Library & Museum.