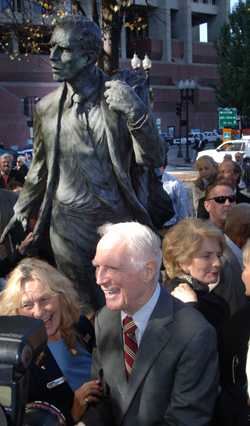 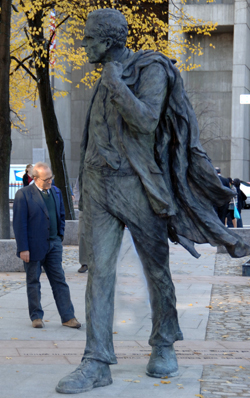 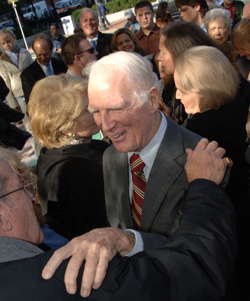 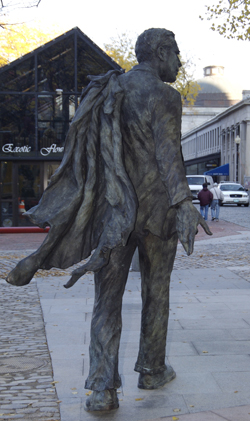 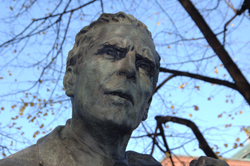 One of Boston’s most beloved and influential mayors of the 20th century got his just due on November 1, 2006 as the City of Boston unveiled the Mayor Kevin Hagan White Statue along Congress Street at Faneuil Hall.

The official unveiling of the statue took place on Wednesday, November 1st.  It was a glorious fall day in New England, the yellow leaves floating in the air and the autumn sun breaking through the crisp morning air.

Mayor White, his wife Kathryn and their children and grandchildren attended the ceremony, along with over 600 of their friends, relatives, political allies, City Hall workers, and admirers.

Everyone agreed that Faneuil Hall was the most fitting location for the statue, since without Mayor White’s insistence, Faneuil Hall would never have been built.

Historian Thomas H. O’Connor, author of Boston Irish, wrote recently in The Boston Herald, that the location “strikes me as most appropriate, both in spirit and location.  The hustle and bustle of the downtown area seems much more reminiscent of White’s energetic spirit and flamboyant style.”

O’Connor credits White as the visionary in the Faneuil Hall project “who refused to listen…when bankers and investors scoffed at the idea of a successful downtown mall that could compete with national chains and suburban malls.”

White’s gamble paid off, O’Connor writes, by attracting tourists to the downtown area, and in turn “stimulating further renewal and development of the entire waterfront, from Marina Park and the North End to the New England Aquarium and South Station.”

George Regan, Mayor White’s press secretary, played a key role in organizing the quest for a statue, after the idea was first broached by Boston Globe columnist Brian McGrory.

Also on hand at the ceremony was the man who succeeded White as mayor - Raymond L. Flynn - who held office from 1984 to 1994 before being appointed as US Ambassador to the Vatican.

Flynn praised White as an extraordinary politician and a great friend who had shaped the City of Boston for decades to come.

“Mayor Kevin White was a brilliant big city mayor whose Irish wit, intellect, and superior education almost carried him into The White House,” Flynn said.  “He helped make Boston a world class city and he was a great credit to his Irish heritage.”

Dick Dray, one of White’s key advisors during his administration, penned a lovely poem for the program booklet that read in part:

Your compassion, your talents, your humor, your style,
Your love for the City and your infectious smile,
And with this new statue…though long overdue
You’ll know just how much – your City loves you.

The 10 foot high, larger-than-life bronze statue was created by Bolivian-born sculptor Pablo Eduardo, now living in Gloucester.  It depicts Mayor White as the public official he truly was - a man in perpetual motion, his jacket slung over his shoulder, getting things done for Boston.

The Boston Irish Tourism Association is pleased to report that the new Kevin White statue will take its place along its Boston Irish Heritage Trail, which tells the illustrious history of the Boston Irish over 300 years through its memorials.