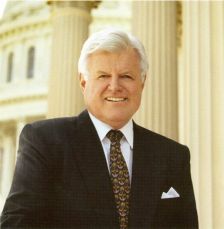 Senator Ted Kennedy was a great champion of Massachusetts, the place he called home. When we started the Boston Irish Tourism Association in 2000, he sent a Welcome Message for visitors coming to the state that was good humored and lighthearted, but his pride and love for Massachusetts was clear. Here are some comments below from Massachusetts officials and groups that have worked with and admired Senator Kennedy for his great contributions to our state and nation.


Governor Deval Patrick:
"One of the Commonwealth's brightest lights went out last night. Ted Kennedy was a compassionate, effective, visionary statesman, family man and friend. Diane and I were blessed by his company, support and many kindnesses, and miss him profoundly. We pray for comfort for his beloved wife and partner Vicki and his entire family."

Lt. Governor Tim Murray:
"This is a profound loss for our Commonwealth, our country, and people around the world who have had Senator Kennedy as their champion for peace and justice. I am deeply saddened by his passing and I extend my sympathies to his wife Vicki, his children and the entire Kennedy family. We all know of Senator Kennedy's reputation as a statesman and a leader in the United States Senate. For me, he has been an inspirational figure for decades. I will be forever grateful that I had the privilege of getting to know him and of working with him from my earliest days as a City Councilor and then as Mayor in Worcester. Senator Kennedy may have walked with presidents and prime ministers, but he was always accessible to the people of Massachusetts and he was dedicated to improving the quality of life of individuals and families in every region of the state that he loved.

State Senator Jack Hart, South Boston:
Today the world mourns a true champion of the people, the protector of the little guy and the Lion of the United States Senate. Over the course of his forty year term, Senator Kennedy successfully navigated bipartisan legislation dealing with comprehensive health coverage, biomedical research, and Education. He was extremely well respected by Democrats and Republicans and carried with him a reputation for getting the job done.

Senator Kennedys legacy far reaches his political achievements. I will remember him for his grace. As State Senator for the First Suffolk District, I had the privilege of working with Senator Kennedy on the expansion of the John Fitzgerald Kennedy Library in Dorchester. The expansion will be called the Ted Kennedy wing. When Senator Kennedy learned my father was sick, he called the hospital to wish him well. This small, yet significant act of kindness not only lifted my fathers spirits, it is something for which my family will always be grateful.

Former Boston Mayor Kevin White (Issued by George K. Regan Jr.):
"Ted Kennedy and I grew up in politics together, and he was a wonderful political classmate. One of the most important things he taught me was how to get a federal bill through, how best to access the federal funds that were important for so many programs in the city. He never took the credit, however.

Betsy Wall, Executive Director, Massachusetts Office of Travel + Tourism:
People here love Senator Kennedy, partly because he so clearly loved Massachusetts. He reinforced our sense of Massachusetts as a special place by the obvious joy he took in being a native son. He seemed to find inspiration, comfort, and delight in Massachusetts, on land and at sea. People here are so proud of that, and of him.

Paul G. Kirk, Jr., Chairman of the John F. Kennedy Library Foundation's Board of Directors:
"Without a doubt, Senator Kennedy was the most accomplished and effective legislator for economic and social justice in the history of our democracy. He was also the most thoughtful and genuinely considerate friend I have known. Among his many contributions to the human spirit, he taught us to persevere and draw hope and strength at a time of loss and adversity. May we all live up to his example."

"We will miss him greatly. He was much more than our esteemed Senator; he was our neighbor and friend."

Charitable Irish Society:
"The friendship, service and hard work Senator Kennedy has given to the people of Boston, America and Ireland is unparalleled in history. While his passing leaves an unfillable void and sadness, it is with warm hearts that we look upon him and his legacy. There will never be another Ted Kennedy, but we can all strive to be like him in his dedication, hard work, and support of those who have less than we do."

John Kerry, US Senator, MA:
“These are difficult days feeling the loss of Ted Kennedy, an unbelievable force in our lives and our politics -- the best Senator, the best advocate you could ever hope for, the best colleague, and the best person to stand by your side in the toughest of times. We all marvel at the way he faced the last challenge of his life with the same grace, courage, and determination with which he fought for the causes and principles he held so dear.
But we also remember Teddy for his love of life - and the way he always kept faith with his friends and even with people from Massachusetts he'd never met but whose lives he changed for the better.”

William Delahunt, US Congressman, MA:
“He was the greatest and hardest working senator of our time and was a beacon of hope to those less fortunate, making a difference in the lives of millions of Americans. He was a passionate fighter for justice, health care, a minimum wage and a decent quality of life for all. His fingerprints can be found on virtually every major domestic initiative enacted into law during his tenure in Congress.

“On the Cape he will be remembered as our neighbor, and for his love of the sea. He knew the waters of the Cape and Islands like the back of his hand and he was a regular fixture on Nantucket Sound.

“He once said that the future does not belong to those who are content with today, or to those who are apathetic toward their fellow man.  The future belongs to those who -- in times of uncertainty -- rise to the challenge and respond with creativity and vigor.

Ted Kennedy rose to the challenges of our time.”

Stephen Lynch, US Congressman, MA:
"I offer my condolences and prayers to the Kennedy family and his staff who were like his second family. We will miss his personal leadership at the same time that we celebrate his life. We are a better nation because of his service to his country, his optimistic vision and his vast legislative accomplishments. I will always remember his personal kindness to Margaret and me. We have lost a true friend.”

Steve Greeley,  Executive Director, The American Ireland Fund:
“The global Irish clans have lost their leader and the pain is deep but the memories are great. Our entire community sends its condolences to the Kennedy family. We will always be proud of Ted.”

James Carmody, VP Seaport Companies and Boston World Trade Center:
“Ted Kennedy was a giant in many ways. Perhaps flawed in a human way his resiliency  through controversy, tragedy, and vigorous political opposition, Ted accepted the challenges life presented him and in the end triumphed. His legacy is vast, as one of the most prolific senators to ever serve, it is characterized by his compassion and vigor in the battle for those most in need.  His commitment to healthcare is legend and he has set the stage for those who will follow. His production for Massachusetts has rightfully earned him the moniker of the Go-To- Guy! There are not feet to fill these shoes.”

John Murtha, General Manager, Omni Parker House:
“Yesterday, the management team of the Omni Parker House held its regular monthly business meeting in the Kennedy Suite of the hotel. This event unintentionally coincided with Senator Kennedy's funeral procession moving slowly along Tremont Street, in front of the hotel where he and his entire family spent so many happy times over so many years. A pause in the meeting gave all of us time to reflect upon what the Senator meant to us, privately and as hospitality professionals. He loved the Parker House and looked forward to being here whenever he could. All of us will miss the opportunity of having him as our guest.”

Wendy Northcross, Cape Cod Chamber of Commerce:
“It was with a heavy heart that we witnessed Senator Kennedy's final ride through Hyannis as he left Cape Cod forever. We know that he will not soon be forgotten as evidenced by the thousands who have visited the JFK Hyannis Museum and left their tributes and thanks in the memorial books. The museum has a special exhibit: Ted Kennedy;. Senator, neighbor, friend. It is a beautiful portrayal of the Senator's life and times on Cape Cod; the place he chose to spend his final days.”